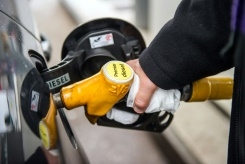 Oil prices have halved since peaking above $100 in June last year, hit by tepid demand in a weak global economy, and a supply glut in the face of near-record output levels

European and US shares ended deep in the red Thursday, with weak earnings reports compounding a slide in the price of oil and other commodities that suggest the world economy is struggling.

Prices have halved since peaking above US$100 in June last year, hit by tepid demand in a weak global economy, and a supply glut in the face of near-record output levels.

In Asian trade US benchmark West Texas Intermediate was down 22 cents and Brent was two cents higher. On Thursday WTI ended $1.18 a barrel down and Brent sank $1.75.

Adding to the pain is a growth slowdown in China, the world's biggest energy user, which has also impacted on other commodities such as copper and iron ore.

And in Hong Kong struggling mining giant Glencore tumbled 7% in the afternoon, following a 7.6% slump in its London-listed shares. Sinopec's Shanghai-listed stock lost 2.1% while Inpex in Tokyo shed 1.8%.

The selling put downward pressure on stock markets across the region, with Hong Kong -- which jumped 2.4% Thursday -- and Sydney worst affected. Tokyo and Shanghai pared some early losses but remained stuck in negative territory.

The dollar edged up against its major rivals after several top Federal Reserve officials cautiously hinted at a US interest rate hike at next month's policy meeting, although traders remained wary with global markets still fragile.

However, they mostly also said the central bank should be cautious, while New York Fed President William C. Dudley added that any increases should be minimal, citing still-weak rises in prices.

“After liftoff commences, I expect that the pace of tightening will be quite gradual,” he said, according to Bloomberg News.

“In part, that is because monetary policy is not as stimulative as the low level of the federal funds rate might suggest.”

Bets on a hike surged -- sending the dollar rocketing -- after data last Friday showed a better-than-forecast jump in new jobs in October and a fall in the unemployment rate to a seven-and-a-half year low.