At first sight, those who don't know Monovithya Kem may mistake the young female politician for a model, especially in the lobby of a five-star Bangkok hotel, where she awaited a media interview late last week. 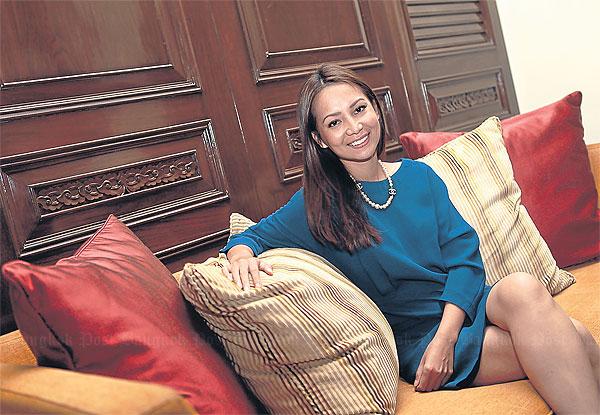 Friday's violent police crackdown on protestors in Phnom Penh, which resulted in at least five deaths and several injuries, prompted the party to adapt _ but not abandon _ its plan for a three-day mass protest scheduled to begin on Sunday.

"I have always been attracted to politics because I grew up with him," said Monovithya, 33.

Sokha Kem ran for the Buddhist and Liberal Democratic Party under the leadership of former prime minister Sonn Sann in the 1993 elections. He later formed the Human Rights Party, which eventually merged with the Sam Rainsy Party to form the CNRP for last year's July election, which saw Hun Sen retain his position amid allegations of poll-rigging.

"I was always out helping in [my father's] election campaign at that time," said Monovithya, the eldest of his two daughters. In 2006 she joined him in a seven-day peace march from Phnom Penh to Siem Reap to promote non-violence and political tolerance in the country.

Monovithya earned a degree in business administration from an American university and a master's degree in economics from the University of Amsterdam in the Netherlands.

Before entering politics, she worked as an activist for non-profit human rights organisations.

Monovithya strongly insisted she is not an "expat" _ a class of young people who came back from abroad and mostly enjoy high social status.

"I don't consider myself an expat," she said. "I was born in Cambodia. I carry one passport. My first language is Cambodian. I would describe myself as a Cambodian with Western exposure."

Playing politics is never easy, but she remains dauntless.

Monovithya took part in last year's election campaign and is responsible for the party's economic policy platform. She currently serves as the CNRP's deputy director for public affairs.

Last election saw enormous progress in Cambodian politics, she said. The catalyst was the change in voters. They are now well-informed and have lost trust in the ruling Cambodian People's Party.

"They have changed and want changes," she said.

Demographic changes are a deciding factor in Cambodian politics.

Monovithya believes young people regard the opposition as a channel that leads to political change. And young people believe in change they can't find in the CPP, she said.

The CNRP refused to form a coalition with the CPP. Instead, it boycotted the election result, holding a series of protests to demand electoral reform and an investigation into alleged election fraud. The campaign steadily gained momentum, eventually unfolding into a call for Hun Sen to step down.

At this crucial time, Monovithya is there with the masses.

"I am responsible for [working with and] mobilising youths during the protests," she said.

Young Cambodians no longer look back at the Pol Pot era, she said. They compare Cambodia to its neighbours _ Thailand, Malaysia and Vietnam.

Foreign media sometimes point out resemblances between the CNRP's anti-government protests and those of Thailand's People's Democratic Reform Committee, led by Suthep Thaugsuban.

Both cry out for change but "there are differences", Monovithya said. In Thailand, for example, the Yingluck government won the election. Yingluck's power is challenged because of the exploitation of majoritarianism.

"But in Cambodia, we have not changed the prime minister for more than 20 years", she said, despite the fact that the opposition won the majority vote in the last elections.

Hun Sen also plans political succession for his children. His youngest son, Hun Many, ran under the CPP banner in the last election, while another of his sons holds a senior position in the Cambodian army.

The road ahead is rough. Police banned the CNRP from holding its major rallies in Phnom Penh after Friday's intervention.

The government's violence came as a surprise, but was not beyond expectation. She said the government must feel threatened by the growing masses against them _ an unprecedented phenomenon in Cambodian history.

The Hun Sen government, she said, cannot tolerate the symbolic challenge by the opposition on Jan 7 _ or Victory Day _ a national holiday which celebrates the end of the Khmer Rouge regime in 1979. Hun Sen rose to power after the UN-brokered elections in 1993 and has clung to the position since.

"The situation is very tense now," Monovithya said in an email.

The CNRP decided to postpone rallies in the Phnom Penh, but will continue to demonstrate in other major cities. The court has summoned Sam Rainsy and Sokha Kem to appear on charges of inciting public unrest later this month. Both men have vowed to fight the charges and seek to petition the international community over the violence.

Monovithya said it is necessary for those in power to realise that Cambodia cannot avoid change in accordance with global trends.

"We Cambodians now have a golden, unprecedented opportunity to reform and show the world once again the great nation that we can be," she said. 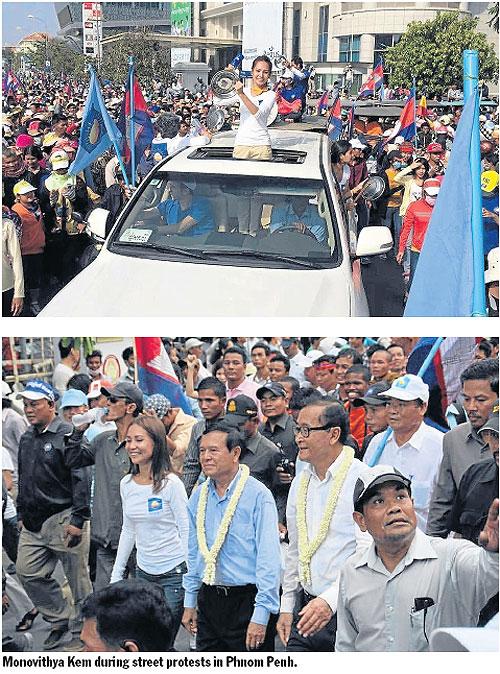